Here’s How Slot Machines Are Programmed

Ever wondered how those all-spinning, all-whirling slot machines are programmed? Well, you’re about to find out!

The short answer is – they’re programmed to randomly generate results, which may or may not lead to wins. So everything is based on an algorithm, meaning you still could hit those big wins…you just won’t be able to predict when!

Get to Know the Random Number Generator

​​​​​​​​At their core, a slot machine will have a Random Number Generator (RNG), which does exactly what it says it does: randomly generates numbers, which when you spin, generates a certain random combination of symbols across paylines.

The RNG works as an algorithm, and is programmed by a computer to generate those random numbers, with absolutely no rhyme or rhythm. You won’t be able to predict if or when you might win, because the results are completely random.

Although the early slot machines had a mechanical RNG, the idea was the same: results are randomly awarded, and there’s not much point in looking how to beat a slot machine.

However, having said that, there are some ways to increase your odds of spinning a win while playing!

So, you ask: how can a slot machine be both programmed and random?

Easily, as it turns out: the slot machines’ algorithm is programmed to work randomly. That means, it’s programmed to show ‘a’ set of symbols across ‘some’ paylines – with nothing predetermined, and these symbols and paylines displaying randomly.

In this way, slot machines work similarly to casino table games: the odds of each game will show you the expected returns of it (more on that below!).
​Although The RNG makes it impossible for you to predict an outcome, there are certain things you can do to try to win at slot machines.
Mix up your play with three-reel slots

Tricks to Winning: How to Beat Slot Machines

Although The RNG makes it impossible for you to predict an outcome, there are certain things you can do to try to win at slot machines.

Mix up your play with three-reel slots

Most modern slots have five reels, loads of paylines and cool extra bonus features. Although five-reel slot machines will give you massive, possibly life-changing wins…these will by no means be a regular occurrence. You’ll probably hit some massive payouts while you’re playing, but you won’t be able to see these coming!

Instead, focus your energy on playing three-reel slot machines. Because there are fewer reels, you’re more likely to hit a win more often, although these payouts will also be for much lower amounts.

If you’re anything like us, you might be more into slow and steady wins, over unlikely wins but possibly life-changing amounts…if you get lucky!

This tip is a winner…but it could also drain your bankroll quicker than you’d like! Since the RNG operates on all paylines, it’s more likely that you’ll get a payout the more paylines you play.

Although these payouts can really range in number, depending on ​​

…you’re still more likely to hit a win this way.

Check the Payout Rate to players

All slot machines have to pass strict regulation if they’re to be featured at respectful and honest casino sites, and part of that is ensuring the RNG algorithm is working randomly.

But, just as all slot machines operate randomly, there’s one cool little trick for winning you can use to increase your chances: the payout rate to players percentage.

This is a number that gives you a theoretical (not actual) guide as to how much the slot machine will payout over its lifetime of spins. Solid, rewarding slot machines will usually have a payout rate of 95% and above.

What that means is, a slot machine with a 97% payout rate will payout around $3 of every $100 put into the slot.

Random But Not Impossible

Even though slots are programmed to randomly display some symbols (that might result in a win), one thing’s for certain: the longer you play at a slot machine, you’re certain to win something.

Test out those RNGs across hundreds of free to play slot machines at House of Fun – get bonus coins just for joining, and get spinning and winning in just a few clicks’ time! 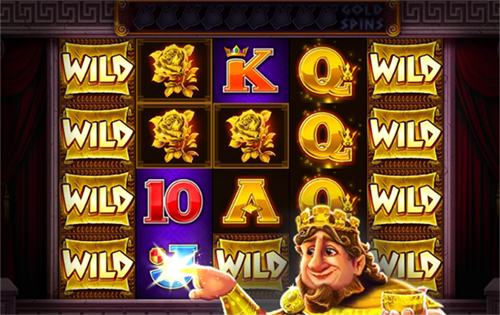